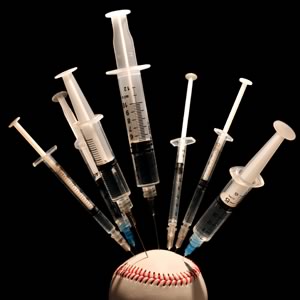 So what is it gonna take for professional sports to get it right as it relates to steroids? Why is it so difficult for them to adopt the methods used in boxing and the olympics, that require post competition testing of the athletes? More importantly, why do the leagues allow the players to dictate, in the CBA, any of the terms by which they have to do the steroid testing? It is completely ridiculous. Why should anyone that competes on a national level have the right to set any of the parameters that would determine whether or not they are cheating? Especially when the results could so easily effect individual achievements and awards.

If you are unable to establish a set of rules that have ALL players in your sport being randomly tested, multiple times per year, how about adopting a policy that says that you must take a test one month before the end of the season, if you are in contention to win any kind of individual award at season’s end. What would be the harm in that? Considering how much value is put in these awards as it relates to things like the Hall of Fame, why not make a more concerted effort, going forward, to make sure that the accomplishment is not tainted? This would not only show that the best players in their sport are clean, but that the players themselves are anxious to let the fans KNOW they are clean. It doesn’t get any more simple than that. To me, if the players union, of any sport, doesn’t agree with that, than its proof positive that they are not only complicit, but that they just don’t care.

In addition, how fun would it be to see a guy having a great season, suddenly tank it for fear of being found out. If it would make the players feel better, than make the test results inadmissible unless you actually win the award. Hell, if a player was using, he would be on a goodwill campaign to get writers to vote for someone else. “Yeah, I know I had 45 HR’s, 145 RBI, and batted .356, but did you see that catch Coco Crisp made last week? He definitely deserves the MVP more than me.” Don’t laugh. That’s exactly what would happen, but who cares.

Of course, I say all this because of the discovery of this years NL MVP, Ryan Braun, having tested positive for PED’s. Just when you thought that the real stars in baseball couldn’t be stupid enough to do steroids, in walks Braun to snap us all back to reality. The fact that he did it, is not what’s bothering me though. What upsets me the most is that he tested positive in the same year he won the MVP, yet the Baseball Writers Association feels no need to take a revote for the award that THEY handed out. How ass backwards is that? I know that the argument I have been hearing all weekend is that if they didn’t take away previous awards from known users, than how can they start now? It’s real easy. You just friggin’ do it. You make the same decision you make every time a known or highly suspected player is up for Hall of Fame induction. You exercise your right to keep him out. You have to wait a few years to do it, but you still do it.

Now you finally have a chance to exercise that right immediately. You have the ability to say, once and for all, that not only do you have the power to give someone an award, but you also have the power to take it away. This would send a clear message to players that you will not only keep them out of the Hall of Fame, but you will definitely not let them build up their trophy case either. If the league won’t do it, then you must. Have the courage to do as much as you can, in the face of a league that won’t. If you don’t, than you only show that you are gutless to the present moment, and unwilling to create change, even when you have the power to do so. I’ll keep my fingers crossed……..but I won’t hold my breath.

One thought on “The Cheating Never Stops”